Dublin ranks among the top countries in Europe for tech companies and startups. It is also very well positioned to attract talent in the coming years now that it is only native English-speaking nation left in the EU and given that Brexit is now complicating immigration to the UK.

Silicon Docks is a nickname for the area in Dublin, Ireland around Grand Canal Dock, stretching to the IFSC, city centre east, and city centre south near the Grand Canal. The nickname makes reference to Silicon Valley, and was adopted because of the concentration of European headquarters of high-tech companies such as Google, Facebook, Twitter, LinkedIn, Indeed etc. The number of tech professionals working in technology firms in the area is about 7,000.

In the 2021 Tech Cities of the Future rankings, which have been compiled by the Financial Times’s FDI Intelligence, Dublin ranks 3rd in Europe as focused on finding the European cities with the most promising prospects for start-ups, technology and innovation investment. 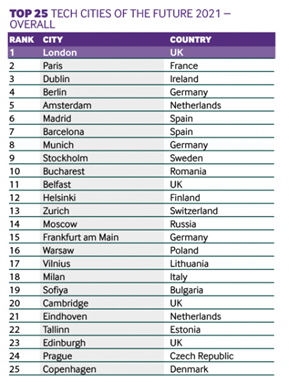 Dublin has been was praised for its success in creating outward foreign direct investment (FDI) jobs. More than 6,500 such roles were created by start-up companies based in the capital between 2016 and 2020, the second highest of all European cities bar London.

The city was also described as a “thriving hotpot in the start-up space” thanks in part to Enterprise Ireland’s funding of early-stage entrepreneurs. The State agency, which is one of the biggest investors in starts-ups globally, doubled the funding provided to companies last year, investing $56.6 million in 125 new firms.

In addition, Dublin is ranked highly for the number of FDI projects being undertaken locally. As an example, in April 2022, Mastercard unveiled its European Tech Hub in Dublin to serve as innovation engine for digital commerce. As the company’s headquarters for Mastercard’s global R&D division, it will expand its existing workforce to 2 000 people by 2025 (source).  Other examples include Microsoft which is behind a $31 million engineering hub and the creation of 200 jobs.